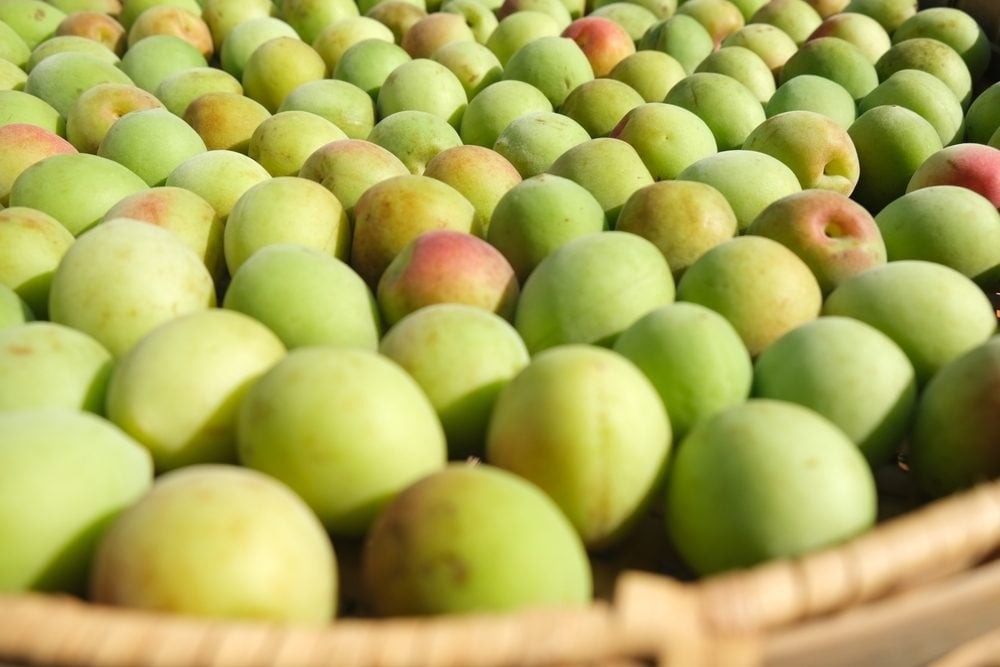 You may wonder what an ume plum is, which is perfectly understandable. The ume plum is a fruit that is used as an ingredient in many staple dishes of Japan.

Below, you’ll find out more about these Japanese plums and how they are a significant part of Japanese culture.

What is an Ume Plum, and Where Did it Come From?

The ume plum is a prevalent fruit in Japan and is used in many Japanese products and food.

The fruit looks very similar to apricots as they are yellow and have the same shape; these plums can also be green, depending on how ripe they are.

Surprisingly, the ume tree, also known as Prunus mume, is genetically closer to an apricot tree than a plum tree. This would make sense due to its close resemblance to an apricot.

It was discovered that the ume plum came from China over 2,000 years ago. Because of this, the ume plum is often referred to as the Chinese plum. But in Japan, it is also called the Japanese plum, or Japanese apricot, due to the fruit’s similarity to apricots.

You can find an abundance of these fruits in major fruit-producing regions of Japan, such as the Yamanashi prefecture.

The ume plum can be used in alcohol, pickled, or served as part of popular dishes. Its sour flavoring does wonders for many of Japan’s foods, making them worth trying when visiting Japan.

What is Ume Blossom?

The ume plum is the developed fruit that follows the fragrant ume blossom. The plum blossom is also known as a winter flower because it starts to bloom at the beginning of February until the end of March.

These blossoms bloom about one month before cherry blossoms bloom. This is important to know so you don’t confuse them when you visit Japan!

Unlike cherry blossoms, the ume plum blossom mainly comes in red, white, and deep pink shades. The flowers are short-stemmed and are much rounder. They are also very fragrant and sweet-smelling.

After ume blossoms were first brought to Japan from China, people began viewing them during the Nara Period. This was when the more affluent residents of Japan could flower-view in their own private gardens.

Ume plum blossoms are associated with many things in Japanese culture. For example, these blossoms represent dignity and elegance; many kimono and yukata patterns include ume blossoms because of this.

Ume plum blossoms surround many Japanese temples. In addition, they also symbolize good luck and health because they are winter flowers — they can grow during cold weather. Because of this, they are also used to guard against evil spirits.

Suppose you want to view ume blossoms when they bloom. In that case, the best places you can see them are Asuka Mikasa in Hokkaido, Koishikawa Korakuen Garden in Tokyo, and Kairakuen in Ibaraki.

The blossoms begin to fall at the end of March and the beginning of April. After this, people can harvest their fruit — the ume plum!

What are the Health Benefits of Ume Plum?

Ume plum also has many health benefits, which is understandable since it’s used in many dishes in Japan, and not only for its good taste.

The riper the plum becomes, the sourer it tastes due to its increased citric acid content. Its natural acidity helps break down lactic acid, which is unhealthy if left in your body for long periods and in high concentrations.

Getting rid of lactic acid is essential because its ions lower your muscles’ pH, decreasing your muscle efficiency and disrupting other metabolites.

This triggers a burning sensation in your muscles. A long time ago, the samurai used to carry pickled plums to eat when they were in battle; the pickled plums would help them recover from fatigue and keep them from starving.

The ume plum is also high in polyphenols. Polyphenols are micronutrients that exist in plants. In the body, they act as reducing agents along with other antioxidants (such as carotenoids, vitamin E, and vitamin C).

This helps protect the body against oxidative stress, meaning a reduced risk of cardiovascular disease, cancer, and inflammation.

In some studies, the ume plum was suggested to reduce cancer risk. The plum extract was shown to stop the growth of cancer cells in the liver. Another study demonstrated that the fruit prevented the development of pancreatic cancer cells. Surprisingly, it was also shown not to affect the growth of healthy cells.

Other studies have pointed to the ume plum preventing the growth of other cancers, such as breast and skin cancer. This is a fantastic discovery of what a simple fruit can do.

As the ume plum can help reduce your body’s oxidative stress, it can also be said that it can help improve blood pressure, reduce your risk of stomach ulcers, and much more.

There are many health benefits to this fruit! Some of these other benefits are listed below:

Ume plum is known to promote your gastrointestinal health because it is high in fiber. Studies have shown that these plums can also reduce the risk of acid reflux by improving gastric motility. More fiber means more efficient digestion.

Your liver is crucial in detoxifying your body, regulating metabolism, and producing essential proteins involved in blood clotting.

According to some studies, the fruit is also known to protect your liver. Eating ume plum was found to decrease liver damage, which is very important as your liver does a lot for your body.

Liver damage can occur due to exposure to excessive alcohol and even obesity. If you’re a frequent drinker, eating an ume plum once in a while will most likely do you wonders.

Ume plum can help prevent cavities due to its antibacterial properties. A study discovered that the plum inhibited the growth of certain bacteria that contributed to diseases such as gingivitis and the formation of cavities.

The fruit also improves bone health because of its high concentration of polyphenols. Studies have shown this as there was an increase in collagen in participants who ate ume plums.

Collagen is a protein vital to bones’ formation as it improves osteoblasts’ function. Osteoblasts are the cells that are responsible for creating bone. This helps reduce your risk for osteoporosis, a disease that leads to loss of bone mass.

The ume plum is also known to stabilize blood sugar. This is because the ume plum increases glucose uptake in your body as it interacts with a specific receptor. This helps in normalizing your blood sugar and keeping it at normal levels.

On the other hand, its fiber can also slow glucose absorption. This can help prevent and regulate fluctuating glucose levels in your body depending on what you eat.

Because of its many health benefits, the ume plum is incorporated into many dishes. Its taste is very strong, so people only need to add a small amount to be able to detect the plum’s unique flavor.

Three of these dishes are explained below.

Umeboshi, a staple of Japan, is also known as pickled plum or dried pickled plum. Umeboshi is made when the ume plum is pickled in a salty substance. After it dries out, it is ready to eat.

In addition to the pickled ume plum, a byproduct is left behind due to the plum reacting to the salt mixture. The salt mixture induces the plum to release its natural juices, which creates a sort of vinegar. 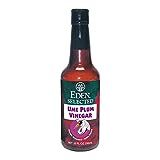 The pickled ume plum is most commonly used as a topping in certain dishes, such as rice porridge called okayu and rice balls called onigiri.

Umeboshi is used in a lot of rice dishes. It can also be flavored with other things, such as honey and red shiso.

Honey is an excellent pairing with umeboshi due to its sweetness; it balances the ume plum’s salty taste and natural tanginess.

Moreover, umeboshi plums are added to many bentos to prevent the rice from going bad. Umeboshi prevents this from happening due to its high salt content. This is also why samurai used to take these snacks into battle.

Alcohol can also be made from ume plum. Umeshu, also known as Japanese plum alcohol, is made when the fruit is preserved or pickled for an extended period. For at least three months, the plum is soaked in a mixture of sugar and alcohol to create this ume plum liqueur.

You can pair umeshu with water or fizzy water to make it more refreshing. You can even pair it with ice!

Ume plum cordial is a syrup that has multiple uses. You can drink it with water for a refreshing beverage or add it to other dishes to spice things up. Ume cordial can even be used for salad dressings as it’s both sweet and sour.

The sugar used to make this syrup is called Japanese Rock Sugar. The ume plum is left in the sugary mixture for at least three weeks.

Ume plum can be used in many dishes. For example, its extract is used to flavor many desserts, such as Kit Kats, ice cream, bubblegum, and even seaweed! You can find many of these snacks in Japanese convenience stores.

If you ever visit Japan, these foods are available all over the country. It’s a must to try anything ume-flavored!

If you’re not in Japan, you can try to make these dishes in your own home! You can even try making other dishes, such as ume miso, an ume plum compote for desserts, ume plum jam for sandwiches, and even ume braised chicken.

Many of these recipes can be found online, and you may be able to find these plums at your local Asian grocery store.

The ume plum is a fascinating fruit, from its beautiful blossom to what dish it ends up in. This Japanese staple is a must-try food you must try when you visit Japan.

With all of its health benefits, it’s no wonder that folk wisdom maintains that an umeboshi a day keeps the doctors away. Discovering these fruits is just another great reason to visit Japan.

Learning Japanese: Resources and Tips for Mastering the Language in 12 Steps 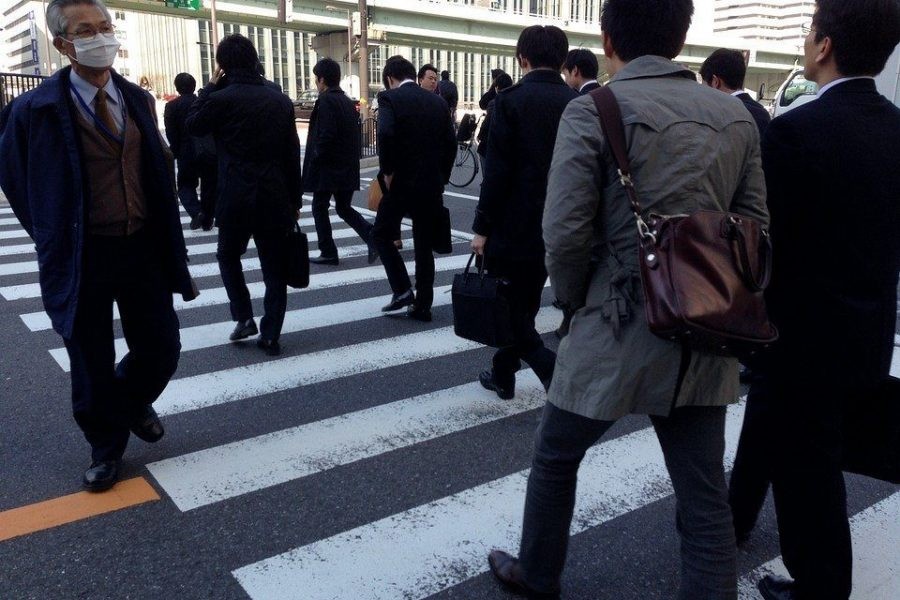 Job Hunting in Japan: A Guide for Foreigners