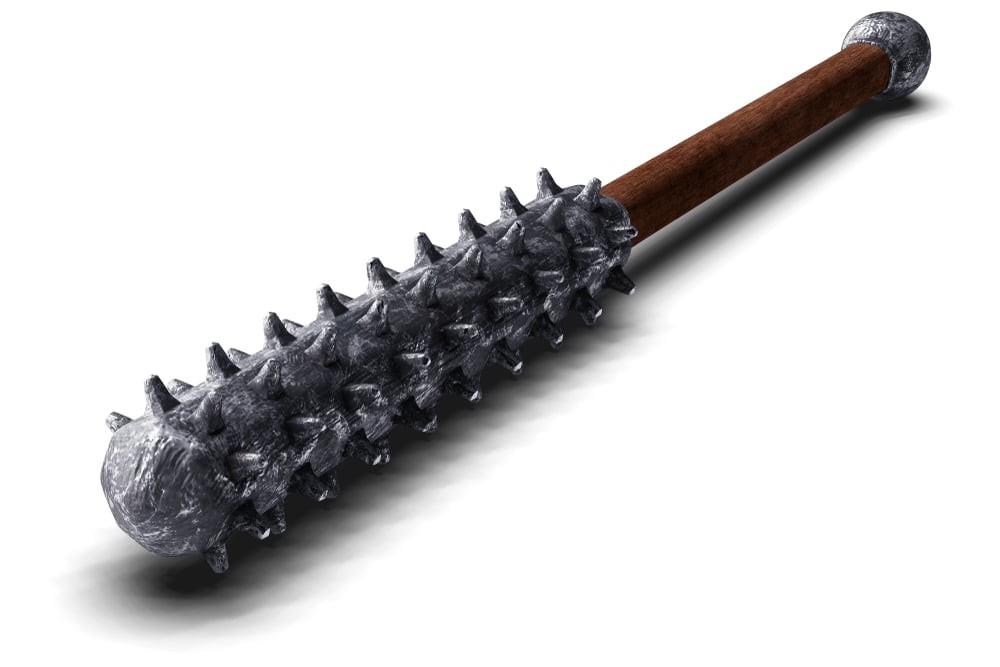 Have you ever heard of the Japanese kanabo weapon? In modern times, most likely, you have not. If you were a 14th-century Japanese soldier, however, you’d probably turn pale at the mention of the name.

This fearsome, dreadfully heavy weapon was designed to cause considerable damage and even death to its victims.

So, what is it exactly? Read on to find out the full story of the iconic Japanese kanabo.

What Is a Kanabo?

Loosely translated from Japanese, kanabo means “metal staff.” This weapon is extremely heavy and long and looks like a baseball bat. Kanabos were typically made of rich types of wood or entirely of iron. The weapons came in several different lengths and designs, which we’ll explore a bit later.

A kanabo typically has a handle at one end, often covered in spikes or studs on the other. The iron spikes and studs would ensure maximum impact and damage. A kanabo has two points of contact where a warrior could grasp it to swing it at an opponent or some other target.

Although cylindrical and very much like the clubs we would recognize, the kanabo was often thinner than a European club. Unlike similar Japanese weapons, the kanabo does not have a blade.

The weapon came into being around the 14th century and was used for martial arts and combat in feudal Japan. Most villages had a blacksmith’s forge where metalworkers would fashion kanabo and other metal weaponry.

Japanese warriors such as Samurai and other soldiers would use kanabo in battle. The Samurai would have needed to wield these heavy weapons from the ground or even on horseback. This means they would need to have been exceptionally strong.

Warriors used longer-shaped weapons on horseback to reach their opponents and targets more easily. Soldiers used these longer kanabo extensively in mounted combat due to their efficacy. The weapon was powerful enough to break a horse’s legs when used by a trained warrior, thus bringing an enemy down.

The warriors were taught how to use the kanabo and other such weapons without wearing much or any protective armor. This instilled a healthy respect for the weaponry of the times while aiding agility.

The use of the kanabo developed alongside various forms of Japanese martial arts. It formed one of the many weapons used by Samurais and any other people practicing the Way of the Warrior (Bushido).

Some of history’s renowned Japanese warriors who used the kanabo include:

What Was a Kanabo Used For?

This famous weapon came into being with more advanced Japanese combat armor. This new armor made it difficult to penetrate with a sword or blade. The kanabo was designed for melee combat so that warriors could break through armor, opposition formulations and positions, and more.

A common use for the kanabo was to break through another warrior’s armor. The weapon was highly effective at crushing even the most advanced armor of the time.

It would also severely damage the human flesh and bone beneath the armor, thereby securing the defeat of an opponent on the battlefield.

The kanabo could affect terrible shock and trauma injuries to enemies. It could shatter skulls and bones as if they were butter. Soldiers would often use the club-like weapon in conjunction with another weapon, such as one with a blade, to finish off an enemy. The weapon would be used to stop enemies in their tracks with its stunning, damaging blows, offering the warrior wielding it the chance to complete the job.

Due to its size and weight, the kanabo could easily take down more than one person in a swipe. Experienced fighters used it in this way to increase the number of enemies they could take down during a battle.

Warriors would also use these weapons to break down walls or ceilings to gain entry into enemy castles and other buildings. They were highly effective at helping soldiers gain access to besieged feudal castles.

The weapon could also easily help clear simpler protective structures made of wood and bamboo.

Warriors would also wield the kanabo to disperse hoards of enemy soldiers, forcing them to break ranks and become more vulnerable to attack. Those using them would often wield the kanabo to clear the way to sought-after foes, such as the protected leader of an armed force.

Blacksmiths and warriors designed several kinds of kanabo in various weights and lengths. The weapon could be anywhere between half a meter and two meters long. The longer ones, as mentioned earlier, were used mainly by mounted warriors. Some kanabo had a spikey metal ball at the end, and others even featured a barbed wire effect.

The longer and heavier the weapon and the more spikes, studs, or barbs it had, the more damage it could do. Exceptionally heavy kanabo were lethal.

Out of interest: the Kanabo vs. the Mace

Weaponry buffs are likely to think the kanabo is similar to a mace. It is, in a way, although a kanabo’s weight is more evenly distributed, making it more precise than a mace. A mace, with most of the weight concentrated at one end, is less forgiving of an inaccurate strike. Even if your strike is slightly off, you can still do considerable damage with a kanabo.

The disadvantage of the kanabo’s weight distribution is that a single blow may not be as successful as a well-timed strike with a heavily weighted mace.

This shorter kanabo was easier for a warrior to use one-handed. The ararebo was simpler to wield. Although this allowed for more fluid, free strikes, this type was less popular with soldiers than the longer versions. This was because they needed more weight and power to make maximum impact.

The aribo design was relatively plain and straightforward. The tapered weapon often did not have spikes, studs, or any additional adornment.

While many kanabo types were made of wood, the tetsubo is made of metal from end to end. In Japanese, the first part of the name, “tetsu,” means metal. The second part, “bo,” means stick. These weapons were typically longer than other kanabo types.

These various kanabo types also sported different iron studs or spikes for extra damaging abilities. Studs were preferable, as they could inflict more significant damage without becoming lodged in materials and armor like spikes often would.

The weapon sounds incredibly effective, right? Yes, but it also had its disadvantages. Due to their excessive weight, especially the tetsubo, they could only be used by an army’s strongest men.

Warriors would also need a large amount of space to wield them properly, which wasn’t always possible with enemies bearing down in hand-to-hand combat. This disadvantage also made it difficult to use when within a military formation.

A Brief History of the Kanabo

In a nutshell, the kanabo was a favorite weapon of the Samurai in feudal Japan from around the 14th century onwards. The warriors used it at the front line of battles where fighting was the most intense. It was considered just as important as a weapon, spear, saber, or sword.

The long, club-like weapons were a highly effective tool in mortal combat. The heavy weapons were mostly made of wood or metal. They were swung above a warrior’s head to hit an enemy. The weapon was used for crushing sophisticated armor. Or, it was brought down on more vulnerable body parts, such as the human skull. It was also helpful in destroying barriers.

The kanabo is synonymous with Japanese Oni, or demons. These oni demons are known as fiendishly strong, clever, and brutal fighters in Japanese folklore.

As a testament to this, there’s a Japanese saying referencing the Oni and kanabo. The phrase is: “like giving a kanabo to an Oni,” which denotes making a challenging scenario worse. In English, we may say “from the frying pan into the fire” or “adding fuel to the fire.”

The famous Hojoki story from 1582 about eliminating desires mentions an Oni demon carrying a kanabo. The weapon is cited as one of the seven held by the renowned warrior-monk Saito Musashibou Benkei, who lived during the Heian period.

Where Can I See a Kanabo Today?

The kanabo has now more safely been relegated to film and Japanese history. It has become a well-known popular culture reference. You may see it in martial arts films and comics and if you visit certain museums with a focus on Asian history.

So, there you have it – all you need to know about this devastating weapon. Still alive in Japanese mythology and popular culture, the kanabo has made its mark on history.

Let’s hope those leading the apocalypse one day will not discover the benefits of this heavy-duty Japanese combative invention. 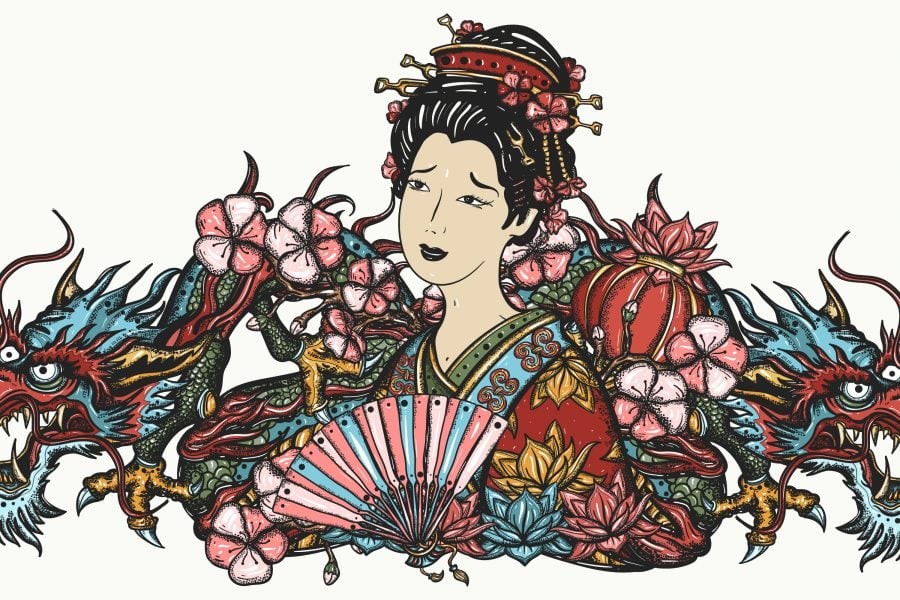