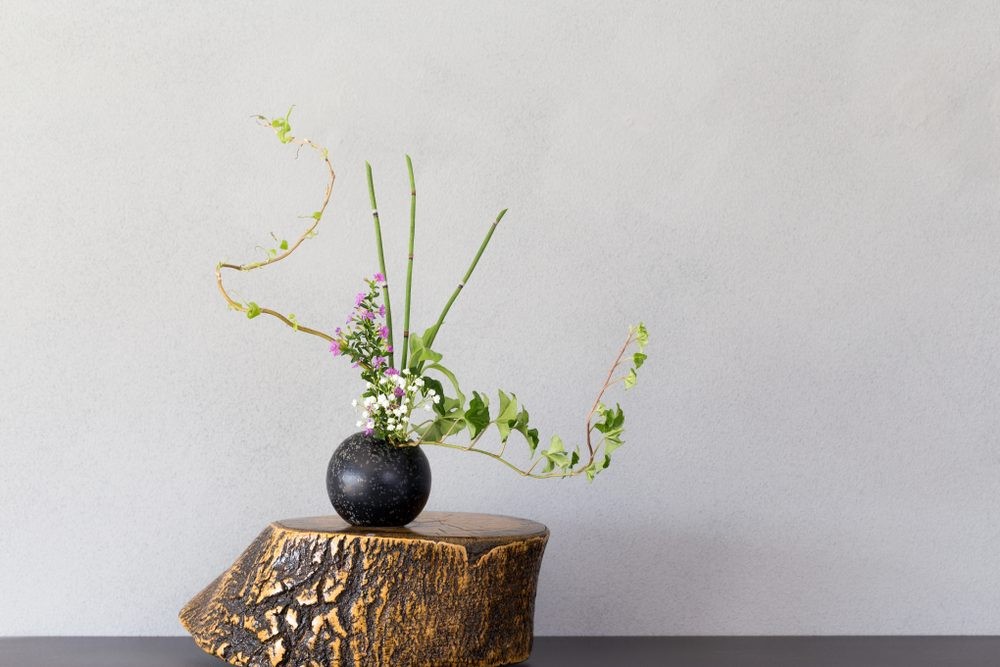 Ikebana is the Japanese art of flower arrangement. The term itself translates to “making flowers come alive,” which suits the practice as practitioners of ikebana work to bring out emotions and feelings through the flora they choose.

Below is more information about this topic of Japanese culture, ranging from the art form’s history to the basic arrangements and where you can learn it.

The History of Ikebana

Ikebana traces back to religious practices in the form of Buddhist floral offerings or ceremonial objects in the native Shinto religion.

The practice was first mentioned in a text written in the 15th century called Sendensho. The text explains the meaning of ikebana and how the practice is meant to show appreciation for nature. In Sendensho, ikebana is presented, from instructions that guide readers on creating arrangements for specific seasons to what ikebana is.

Around the 15th century, ikebana started to become more practiced as flower arrangements were always found in new homes with tokonoma; Tokonoma is a particular area where a precious art object, a flower arrangement, and a scroll were housed.

Tokonoma was an area for decoration and color in contrast with traditional Japanese homes, in which they were not as colorful and dull. The decoration in tokonoma was changed regularly, depending on the seasons and festivities. This allowed ikebana to flourish and become more of cultural practice and distinct art form.

The atmosphere of ikebana mimics sculptures, such as the Statue of David, and other artwork, like The Starry Night. Like these well-known art pieces, ikebana also aims to make the viewer feel something through flowers and other flora and how they are arranged.

Ikebanaists consider color, form, line, and function when arranging flowers, just as a painter considers every stroke and color they use. Because of this, their arrangements can vary from one another in terms of size and composition.

In Japan, many native plants, trees, and flowers have symbolic meaning and are associated with specific seasons. For example, listed below are some typical flora with their associated season or festivities:

These arrangements can look similar to each other depending on the season or holiday. Because of this, ikebanaists also consider their flora’s meaning when creating an arrangement. This adds variety to every one of their arrangements.

In addition, artists in the field can also trim the flora and flowers they work with, so much so that the pieces they work with are unrecognizable. Ikebanaists can even paint the plants they work with. Although they can do this, their goal is to maintain balance in their artwork. They can also place their arrangements in vases, but this usually does not happen.

In these floral arrangements, all factors should contribute to an even more beautiful piece. All plants should have meaning in their placement in the ikebana arrangement.

Ikebana can be practiced by anyone, ranging from amateurs to professionals. However, as with any activity, mastering the basics is necessary for this cultural practice.

Precision is essential in this practice and is highly valued in Japanese culture. This art involves precision, especially in ikebanaists’ technical skills, such as cutting flowers and branches, measuring the appropriate space between the flora, preserving the material they are working with, and maintaining a clean workstation.

When starting this practice, beginners are taught these skills of precision. Not only that but they are also taught to understand the materials they work with in terms of their inner qualities and how they change depending on their arrangement.

Beginners in the art usually start with these two styles of ikebana: Nageire and Moribana. These two styles involve having two tall branches and a small wad of flowers that follow the three-stem system of shin, soe, and hikae – their respective meanings are heaven, man, and Earth. All other elements are called jushi, meaning that they are supporting factors. These factors are usually present in all ikebana arrangements.

What is the Basic Arrangement of Ikebana, and How is it Made?

As mentioned before, the two basic styles of ikebana are Nageire and Moribana.

To prepare a Moribana arrangement, ikabanaists begin by adding water to a shallow vessel. After that, a small object used to keep flowers and other flora in place, called a kenzan, is placed in the container. Then, the ikebanaist chooses a flower that will fulfill hikae and two branches that will fulfill shin and soe.

The stems chosen for shin and soe are measured and trimmed to specific lengths and arranged at different angles on the kenzan. The basic setup is complete after this task.

To complete the arrangement, jushi stems are added to hide the kenzan and add to the beauty of the current arrangement. This task is repeated over and over until the artist is satisfied with the arrangement.

Where Did Traditional Ikebana Come From?

This cultural practice began to flourish in the 15th century, after the publication of the Sendensho and the use of tokonoma in newly built houses.

The first master of ikebana, Ikenobo Senkei, learned at the Ikenobo School, where he constructed many beautiful floral compositions. The Ikenobo School gained its name from the priests in Kyoto who followed the Buddhist tradition of offering floral arrangements in temples.

Ikenobo Senkei specifically practiced a secular style called Rikka, which translates to “standing flowers.” In this style, irises, chrysanthemum, Pine, and boxwood are usually used. Rikka involves seven to nine core elements. These elements include a mix of two to three flowers and a variety of tree branches.

In Rikka, these plants are combined in a traditional Chinese vase to create elegant shapes. In this style, tall elements are usually in the center while shorter pieces shoot outwards. Beginners may find this factor difficult because having the plants stand upright without full support requires immense skill.

Ikebana arrangements in the Rikka style are considered the most beautiful and unyielding. Rikka is usually meant for temples but is also found in palaces and wealthy households.

The other major style is Nageire, which translates to “thrown in.” Unlike Rikka, Nageire is much more minimalist and is free of the formality and rules of the Rikka style. These flowers are usually placed in tall vases that support the stems of flowers. In Nageire, flowers are not meant to stand upright on their own.

Nageire was created by Sen no Rikyu, Japan’s most famous tea master. In his tea ceremonies, Rikyu emphasized minimalism in his single stem arrangements in Zen Buddism ceremonies.

How Did Modern Ikebana Rise?

The transition from traditional ikebana techniques to modern ones did not begin 200 years later, in 1868. Because of over 200 years of being isolated from the world, Japan’s cultural practices of art didn’t change. When the country opened to foreign exchange in 1868, ikebanaists quickly incorporated Western customs into their floral arrangements and other Western customs into their culture.

The first modern school of ikebana was called the Ohara School, established in 1912 by Unshin Ohara. Founder Ohara helped transform traditional practices into contemporary ikebana by creating the Moribana style. As the Moribana style grew, two significant changes occurred: the implementation of Western flowers and the use of a circular, shallow container to have flowers stand upright with the aid of the kenzan.

Unlike the two traditional styles, Rikka and Nageire, the Moribana style allows for more variation and flexibility, making it more enjoyable for the artists as they are allowed to widen their creative horizons. Presently, the Moribana style is known to be a favorite style in every ikebana school.

The Moribana style has a three-stem system in which three flowers are arranged to create a triangle. If floral arrangements don’t follow this system, those floral arrangements are known as freestyle. In freestyle, ikebanaists can use more original and creative methods to construct their compositions.

The transition from traditional to modern ikebana continued throughout the century. In 1927, the Sogetsu School was created by Sofu Teshigahara.

The founder of the Sogetsu School was responsible for making ikebana the way it is today; he advanced the technical practices of ikebana to artistic practices of artwork similar to that of sculptures. Sofu Teshigahara’s father was also a master of the practice.

Along with his teachings, Teshigahara also believed that ikebana is almost like the window to the creator’s soul. He believed that through these floral arrangements, an ikebanaist’s life and life events are revealed; flowers used in the composition express the ikebanaist’s soul.

Due to these modern innovations, the Rikka style began to dwindle. The most popular types, Ohara, Sogestsu, and Ikenobo, are taught in around the 400 schools teaching ikebana today.

Ikebana today aims to unite people around the world. The Japanese practice of flower arrangement began to spread in the mid-20th century. The person who facilitated this internationalization of ikebana was Ellen Gordon Allen. Allen was an American who studied ikebana during her time in Japan.

Beginning in 1966, Allen internationalized the art form by working with major ikebana schools. Through Ikebana International, a non-profit organization, Allen worked to emphasize the diplomatic mission of “friends through flowers.”

Many floral artists use the techniques in ikebana to develop original creations. For example, Camille Henrot, inspired by Japan’s practice of floral arrangement, is a floral artist that continues to create new works. After internationalizing ikebana, schools that teach ikebana have risen globally.

Presently, ikebana is more commonly referred to as kado in Japan. The term kado translates into “way of flowers,” fitting for the cultural practice. This term more accurately describes the practice and the meaning of capturing nature’s beauty and the lifelong learning path. Ikebanaists learn to depend on nature and explore many different floral arrangements.

The practice of ikebana requires curiosity and the determination and creativity to discover new arrangements while appreciating the pieces of nature.

Ikebana was once a cultural practice, but now it’s an art practiced worldwide. This artistic practice extracts emotions from its viewers while allowing artists to express themselves and their life stories.

If you’re interested in ikebana, many schools teach the practice and are willing to teach anyone who desires to appreciate nature and learn.

Like sculptures and other artwork, ikebana is enjoyable to view and stirs viewers’ curiosity by making them investigate what the artist is trying to convey. 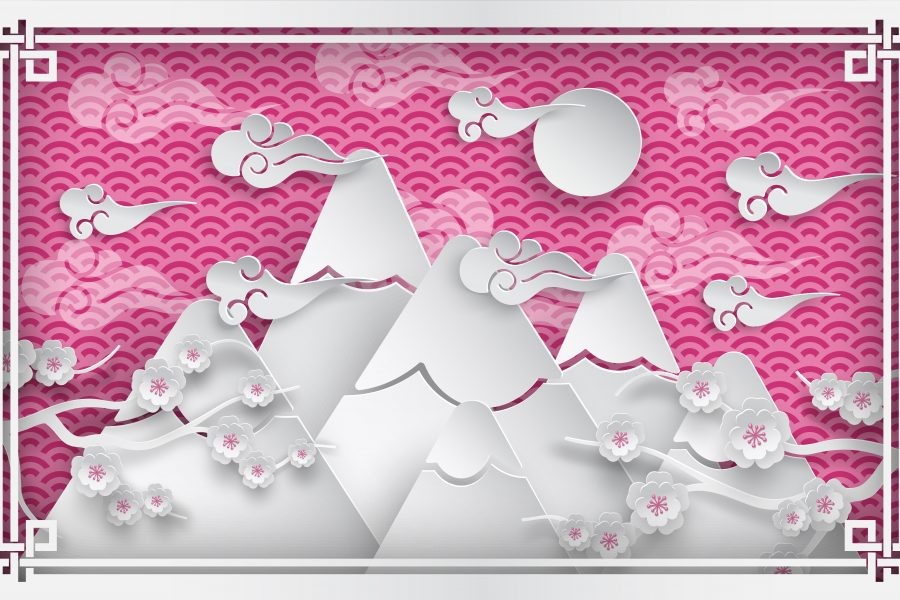 Discover the Art of Kirigami: A Guide to Japanese Papercutting