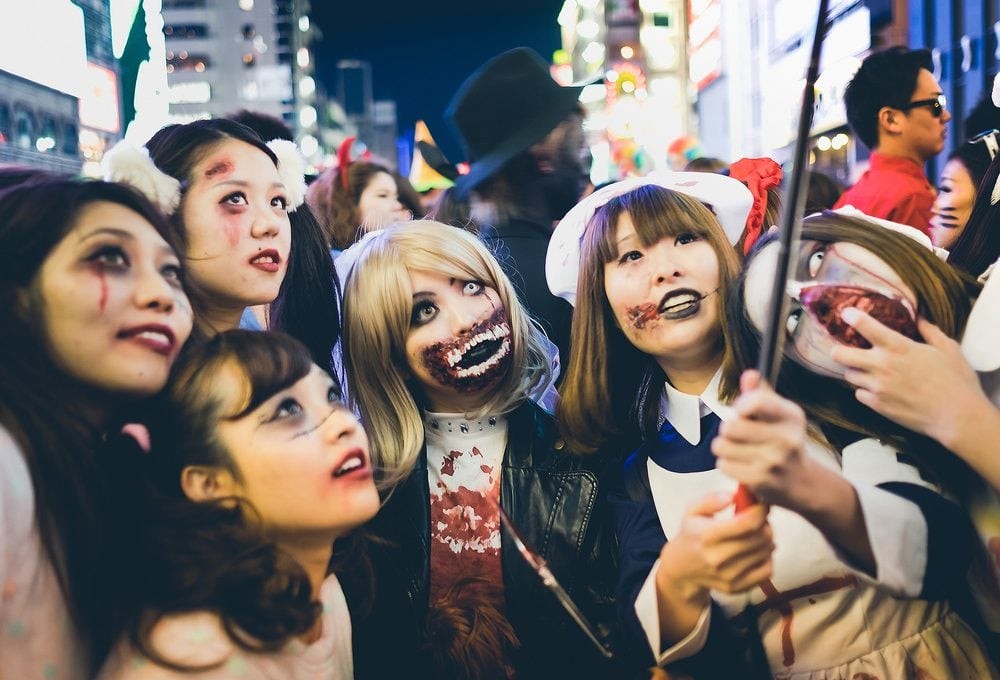 Halloween in Japan is likened to Christmas or Valentine’s in the rest of the world; it’s a popular holiday celebrated either with event festivities or costume street parties.

No matter where you go, you’ll find Halloween parties, orange and black cuisine, pumpkin carving, and costumes (cosplay is big).

Halloween came to Japan in 1997, thanks to Tokyo Disneyland’s “Disney Happy Halloween” event. Since then, Disneyland in Tokyo has held a Halloween event every year, and the holiday has become popular throughout Japan.

Unlike in many other countries around the world, the holiday in Japan isn’t rooted in a celebration of the dead.

Traditional Japanese culture is generally irritated by unruly Halloween trains, gore-y parades, or drunken parties, and trick-or-treating isn’t popular. The country focuses on enforcing police monitoring on trains and in center squares on holidays to tame rowdiness and limit littering.

The sale and consumption of alcohol in Shibuya have been banned for several days leading up to and following October 31.

If you’re hitting Tokyo with children on the big day, opt for a festive event like Disneyland, Universal Studios Japan, or the free Kawasaki Halloween parade.

Dressing up is the cornerstone of Halloween in Japan and the thread that brought the tradition from the west.

On October 31 in Japan, you’ll see every rendition of popular Japanese characters and terrifying zombies, witches, ghosts, and vampires.

You’ll also find great renditions of mystical characters from Japanese lore, and cosplay and dressing up as your favorite character from a TV show, like Pikachu, is common.

If you’re looking for major anime culture, head to Ikebukuro, where you’ll find nearly everyone dressed up as their favorite anime or Manga characters.

Daiso and Don Quijote, or Donki, are popular costume stores where you can get practically any outfit.

Where to go for Halloween events in Japan: travel tips

Halloween in Japan is celebrated beginning on Saturday before October 31, with costumed gatherings in the streets, parks, center squares, or theme parks.

Costume parties are a big part of Halloween in Japan, and the celebrations are always tied together with extensive dress-up and plenty of chu-hi or beer.

In Tokyo, the districts of Roppongi Hills, Ikebukuro, and Shibuya host some of the grandest street parties in Japan, with October 31 events calling over 1 million people and the parties raging between sunset and 11 pm on October 31 every year.

Here’s your guide to choosing a party you’ll enjoy:

Some of the most well-known party places in Japan on Halloween include:

The Ikebukuro Halloween cosplay is one of Japan’s largest Halloween festivals. The festival is free to watch, or you can join as a performer by purchasing a ticket. Ticket plans include changing room access, vanity and storage spaces, and a personal cosplay concierge.

The Ikebukuro district is located in the city of Toshima, Tokyo, near Shinjuku and Saitama. It’s a commercial hub and home to Animate, one of the world’s largest anime shops.

If you’re into urban arts, this is your one-stop photoshoot. The festival connects world culture with Tokyo’s urban art scene and haunted spirit.

Some notable haunted houses include:

The Tokyo Disney Halloween celebration takes place every year from September 9 through October 31 and is known for its traditional Disney characters that turn into ghosts come evening. There’s also a giant, 100-float parade and dance parties.

If you want to participate in the festival, you must follow the Disney Halloween appropriate-character rules, including no weapons, no heavy makeup, no realistic injuries, and no sexual or over-revealing costumes.

The Hello Halloween Pumpkin Parade in Harajuku-Omotesando is an annual October 31 parade put on by around 3,000 kids who march along the nearly half-mile section of Omotesando.

Every year offers its highlights, including sweets (or okashi in Japanese) from participating shops in the local area and Halloween-themed restaurant and cafe menus throughout the month.

Sario Puroland theme park is the go-to for all things Hello-Kitty on the big day. The characters transform over the month of Halloween into ghost versions of themselves.

Haunted houses on Halloween in Japan are some of the most likely to make you wee in your pants. The form of entertainment, called Obakeyashiki (お化け屋敷), uses carefully designed characters and sets to simulate an actually scary experience similar to a horror movie – but with you in it.

Some of the spookiest haunted houses in Japan include escape rooms, drive-through haunts aren’t hard to find, and mobile haunted houses are increasingly popular, so you can join in no matter what.

Street parties are a hot costume festivity on October 31 in Japan. Some popular street party locations include Shibuya, Tokyo, and Roppongi Hills.

In Shibuya, the Center Gain and Scramble crossing are both closed on the holiday to accommodate the mass gathering.

Read the news before you go to make sure you’re attending a street party aligned with your idea of fun. Check online for updates on the year’s theme, age restrictions, parking, participation guidelines, and hours.

Japan’s rail system gets into the Halloween spirit every year, and several lines publish updates on their festivities so you can participate by dressing up for the ride.

The Halloween trains have been a hit for Halloween enthusiasts since the 1990s when Osaka and Tokyo trains transformed overnight into party locations. The rowdiness caused a large disturbance on the lines, involving riots and police and dampening Japan’s October 31 spirit.

However, the nightmare has eased since its creation, with more organization and regulations to reduce the disturbance to regular passengers and keep litter at bay.

Halloween in Japan has also picked up, including orderly Halloween trains.

Some popular lines to join on Halloween in Japan include the Osaka Midosuji Line, the Osaka Subway (including a train for children and one especially for adults), and zombie-themed trains like the Randen Line, where you can get a discount by dressing up!

The  Randen Line runs above ground from the middle of Kyoto to Arashiyama. During the month of August (not Halloween), the line includes a monster-themed or yokai train that looks like a tiny haunted house.

The monster train is popular in August because August is a traditional time for telling scary stories. The chill that runs down your spine is thought to cool you down in the hot summer weather.

Passengers get a discount if they ride in costume.

Is Obon the Same as Halloween in Japan?

The Obon festival, also known as Bon Festival, is an ancient Buddhist festival held for three days in Japan. The celebration honors ancestors and ancestral spirits visit household altars to reunite with their families during the festival.

Obon is held on the 7th day of the 15th month of every year, either in July in August. Depending on the area, it is observed from mid-July to the 15th or 16th of August.

However, Obon and Halloween are not the same in Japan. Obon is rooted in spiritual culture, whereas Halloween in Japan is rooted in fun and dressing up and is not an important commemoration of the dead to most Japanese.

Trick-or-treating isn’t the spotlight on Halloween in Japan, but there are plenty of goodies to make and try.

Many restaurants and cafes offer limited-edition goodies in the traditional black and orange colors, and though trick-or-treating isn’t traditional, carving jack-o-lanterns is still common, and you’ll find grab-bags full of Halloween goodies in the major supermarkets.

Why is trick-or-treating not a thing in Japan?

Trick-or-treating hasn’t made a hit in the Japanese culture of honor, kindness, and respect for others. In Japan, this western tradition seems more of a bother to the neighbors.

On Halloween, children in Japan traditionally dress up and visit shōtengai, a street market district. The area is closed to vehicles, and the shops decorate extensively on October 31, sell limited-edition products and foods, and give out candy to trick-or-treaters.

And it’s more – trick-or-treating, while sometimes seen during the day on October 31 and in commercial areas, doesn’t hold the air of Japanese culture.

See also  Exploring the Fascinating World of Hanabi: A Guide to Fireworks Festivals in Japan

Instances where it’s started to grow as a tradition have been squashed – as in this story of the Yakuza trick-or-treaters:

Among the nearly non-existent trick-or-treating tradition in Japan, a Japanese Halloween culture story tells of the Yamachi-gumi, a criminal Yakuza clan in Japan that was once known for giving out candy to children on Halloween.

The criminal clan was known for some time for their annual trick-or-treating event – a rarity in Japanese culture despite the holiday and illegal in many areas.

More foreigners soon got wind that the Yamachi-gumi gave money to trick-or-treaters, and the ball kept rolling until the clan also got wind of the western Halloween tradition and began handing out candy.

Some believe the clan may have wanted to create a more worldly image for themselves and erase their “evil” connotation within their community.

Either way, Japan’s Organized Crime Exclusion Ordinances recently made it illegal for criminal organizations to give money or products to minors.

On November 1, Halloween decorations usually come down, and Christmas goes up in markets and homes.

How to Celebrate Halloween in Japan

If you’re traveling in Japan over October 31 and you’re up for some expert dress-up and serious scare, follow this run-down to join in on the fun:

If you’re with children, opt for a festival location to avoid the racket on the streets.

Remember, Halloween in Japan is all about dressing up, and the biggest Halloween event is found on the streets, especially in Shibuya. 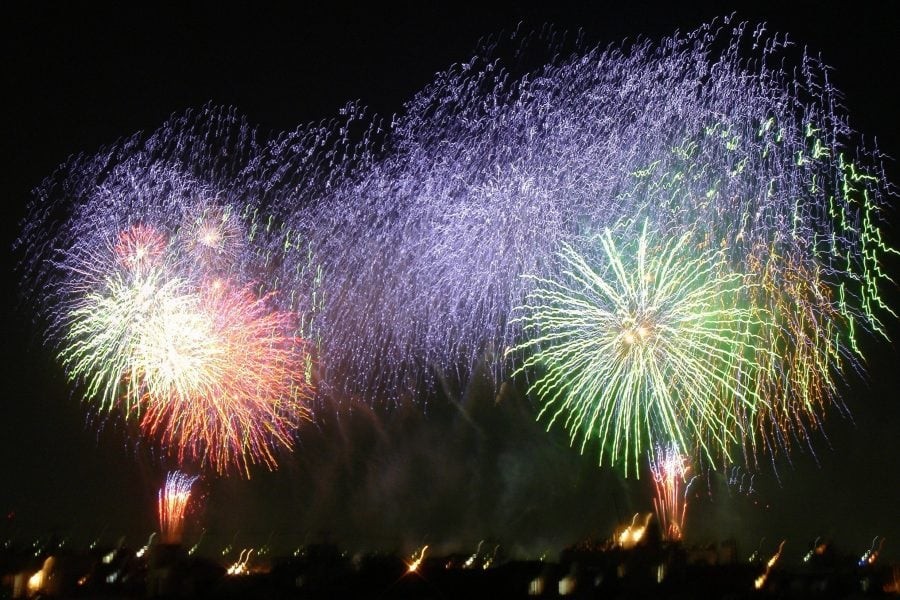 Exploring the Fascinating World of Hanabi: A Guide to Fireworks Festivals in Japan 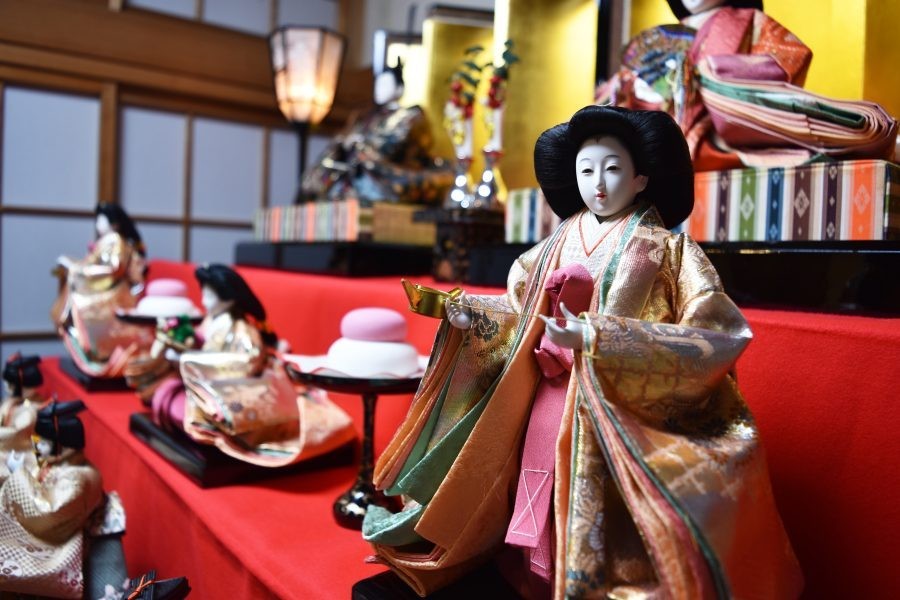